Of all things, the street lights that allow us to safely walk, pedal or drive at night are being targeted for the wires they contain. Frustrated officials are reporting that thieves will do almost anything to cut into the poles and snag the copper and other material inside. Some vandals have even resorted to using cars to ram the poles and break them open. The damage they cause cost thousands in repair bills each year and in some areas the poles barely get back in operation before they’re attacked again.

This is happening everywhere street lights are: business districts, residential areas and parks. It’s also becoming a headache for retail property managers who find themselves battling wire theft from the light poles in their parking lots. This costly and dangerous situation puts public safety at risk in areas that need to be well-lit at night. Putting an end to the destruction means deterring the culprits at the scene and having clear video evidence to prosecute them once they’re caught.

This is easier said than done, however, as many deterrence methods have been tried without success. These include locks, using tamper-proof screws and even marking the wire to indicate the source; but vandals are determined and have found ways to get around these measures. Placing surveillance cameras that rely solely on power sources supplied at the poles aren’t much use either. Once the wires are cut and power is severed the cameras stop recording too.

The MPS Power Sentry is a different kind of camera system that can be outfitted with built-in battery packs. If the power source is interrupted for any reason, the system immediately begins to draw power from the batteries and the cameras keep rolling without a break. It can also be configured with many options such as audio and deterrent devices to startle and confuse vandals.

The Power Sentry offers many other benefits for cost-conscious communities and businesses that you won’t find at one-size-fits-all providers: 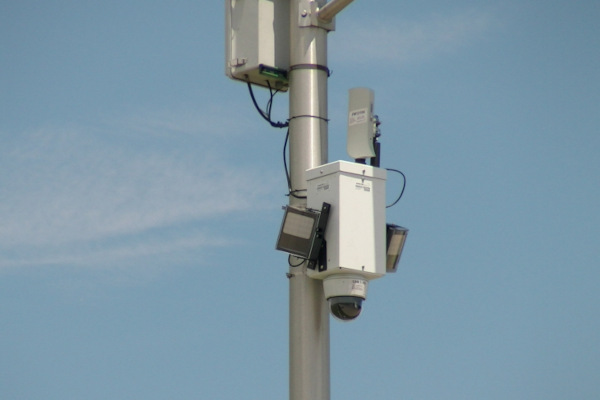 Tailor the system with the technologies and features that you want.

Don’t replace — enhance existing systems–your Power Sentry can be fully integrated with cameras and software already installed at a site.

Have full remote control of all operating features at all times.

Start with one unit or a hundred and then scale and upgrade equipment at your pace.