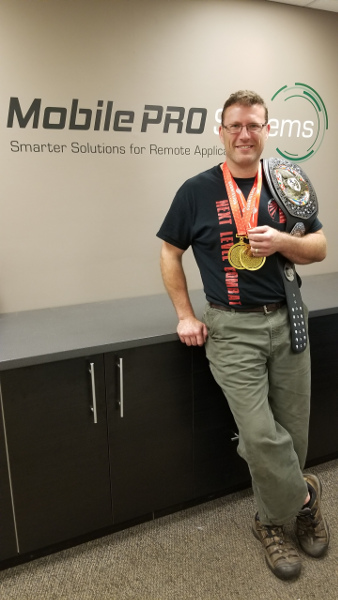 When Jeron Stiffler joined our production team last spring he brought more to MPS than his skills as a machinist, welder and fabricator. We soon learned about Jeron’s passion for the martial arts and his dedication to training, competing and paying it forward by teaching others.

In addition to being a certified black belt in Karate, Jeron competes in Muay Thai Kickboxing, Jiu-Jitsu and American boxing/MMA. In June 2017, he fought for and won the Championship Belt for the Senior Mens Novice Championship at the Thai Boxing Association National Tournament held in Des Moines, Iowa. Jeron describes this tournament as “the mecca of American kickboxing” with 800 men and women competing from around the world. This year he claimed two gold medals in the Jiu-Jitsu Minneapolis Submission Challenge which requires a completely different skillset as there are no punches or kicks allowed; the match is won or lost by submission only.

Jeron got his start about 10 years ago when he joined a local gym to get in better shape, but then found it was a challenge to keep the workout routines interesting. “When I started working out it was boring. I’ve always wanted to learn martial arts. I grew up watching Jackie Chan and Bruce Lee.”

At 43 years old, Jeron is an inspiration to others for setting and exceeding personal fitness challenges for himself. Even though his training and teaching schedule take up a large part of his time outside of work, his family is very supportive and encouraging. When we asked how long he thinks he may be able to continue the rigors of being a martial artist, he told us he sees no end in sight. “I don’t see myself stopping in martial arts.”